Cancer Bob and the Yoyo

Cancer Bob and the Yoyo


By Alan McCormick & Jonny Voss.
Published in 3am magazine. 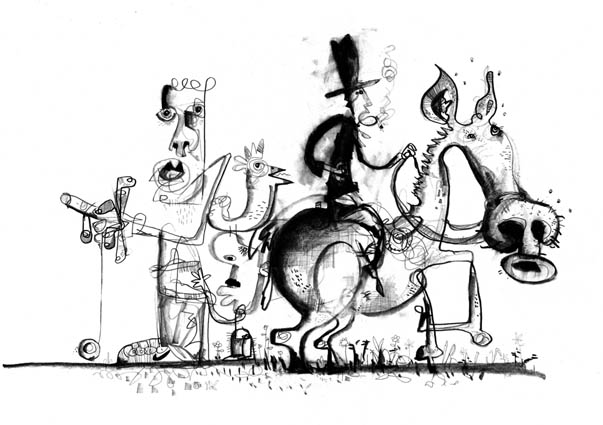 Bob with the Cancer, a charred renegade cowboy scout was puffing and lolloping along on his half-assed, half-blind donkey when he passed two unlikely lads cavorting on the skirted hem of a daisy prairie.
One of the unlikely lads, Pete with a rooster, cried, ‘Yo!’
‘Yo,’ repeated his crushed-almond-eyed friend.
Cancer Bob creaked around his saddle to face them: ‘What in the name of sweet Jesus are you two female faggots wanting from me?’
‘Yo yo,’ shouted Rooster Pete and his nutty fiend.
Now the donkey agitated around to bring Cancer Bob nuzzle-up-close to the yoyo pair.
‘I’ll say it only once: why are you rattle-snakes repeating your death rattle claim on my running-out-time?’
‘Yoyo, sir. It’s all the craze in the East. Spare us a dime and we’ll furnish you with our presentation.’
‘What do you think, Dong?’ Cancer Bob asked of his donkey. ‘Shall we give them a dime for their troubles or shall we blast their dim-witted asses back up to Kingdom come?’
Donkey Dong looked heavenward and brayed very loud.
‘Sorry boys, I have my answer,’ said Cancer Bob with a rotten kind of smile. Then out came his pistols and squeeze went the triggers. Bullets flew and the two unfortunate, unlikely lads fell backwards onto the skirted hem of the prairie.
As the rooster cooked on a fire and Donkey Dong hoofed up granules of desert to make two shallow graves, Cancer Bob lay on his back doing an expert cat’s cradle with the yoyo. ‘Those talent less fuckers will be pushing up daisies soon enough,’ he said.
‘And so will you, Bob,’ replied Donkey Dong.
‘Guess I will at that,’ said Cancer Bob allowing a crooked smile to pass across his lips as he offered his donkey dong a drag on his nicotine.
Posted by Jonny Voss at 07:36

Email ThisBlogThis!Share to TwitterShare to FacebookShare to Pinterest
Labels: 3am magazine